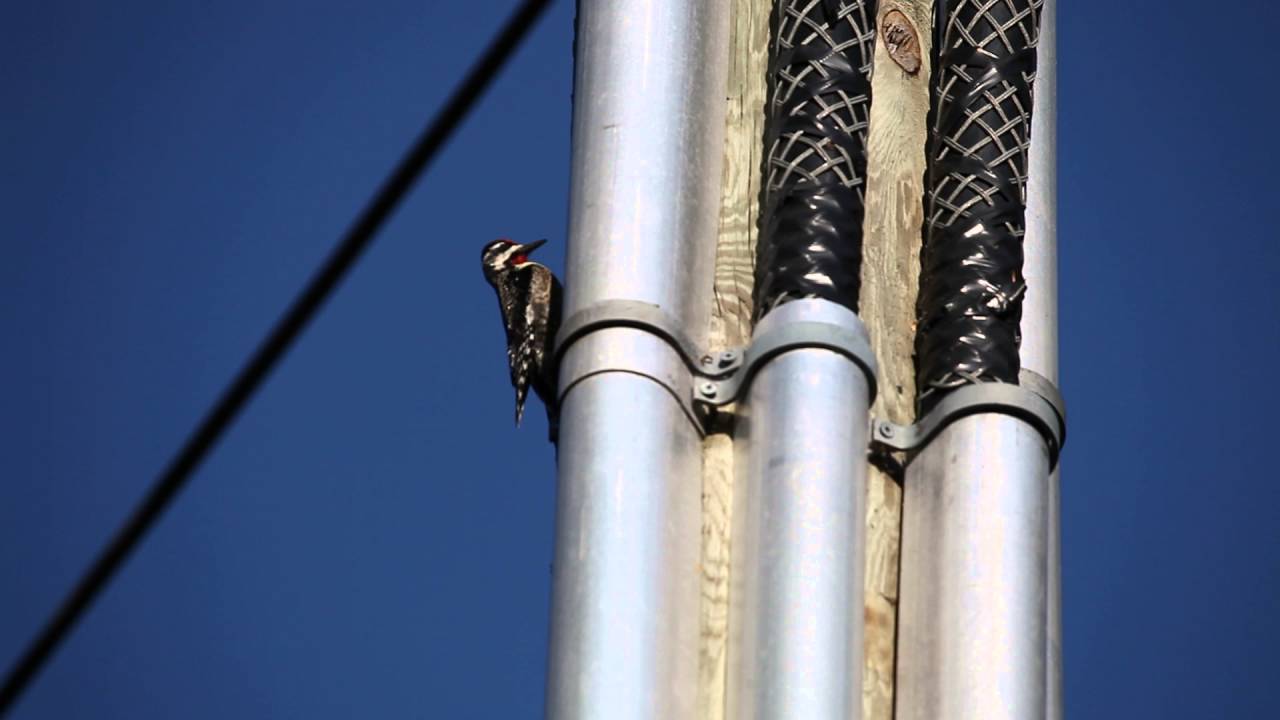 A most beautiful and socially fascinating bird type, the woodpecker is a favorite in many a yard. Though not the most common of birds seen at the feeder, once a woodpecker finds that most attractive yard, they often return every season.

However, some people with regular visiting woodpeckers will tell you about the often unconventional personality type of these feathered visitors! For some, the pecking antics of the woodpecker leave a lot to be desired.

Here we look at just one of the woodpecker’s quirks – that of pecking metal.

Why Do Woodpeckers Peck?

To get an idea of why these feathered friends get their name, we only have to look toward the most basic instinct of a woodpecker.

Pecking is a natural behavior for this bird and their primary way of searching for food. By pecking, a woodpecker can pierce through the bark of a tree to retrieve their food source. This usually consists of insects and larvae.

As well as using the pecking motion as a means of finding vital food sources, woodpeckers also peck at trees to create a nesting site.

However, there’s another motion similar to pecking that woodpeckers also regularly perform. This is referred to as drumming. While woodpeckers do drum on trees, the problems for many people living nearby begin when this drumming is performed away from the trees and around the immediate home environment!

Where Do Woodpeckers Peck?

Unfortunately, if you’re lucky enough to attract woodpeckers to your yard, you may also fall victim to the number of woodpeckers spotting the more shiner and attractive of items placed on and around the outside of your home.

The problem is that woodpeckers are not only fans of trees and wooden items – but also metal! This means they can and will drum away on anything such as:

Why Do Woodpeckers Choose Metal?

Birding experts believe that woodpeckers choose metal for their drumming antics for two reasons. The first is to attract mates. The second reason is to establish their territory.

The sound that reverberates off metal is extremely satisfying for these birds and has the most desired effect when compared to that of trees. This is simply because metal is louder than bark and wood!

The peak time for most woodpeckers to drum tends to be during the spring months. However, woodpeckers are extremely persistent and often the harder of birds to be driven from established territory.

The issue for most people is the intensity of this drumming/pecking. Though it may only cover a few short weeks or maybe a month or two at most, it can occur numerous times over the space of a single day.

Though it may not sound like it, woodpeckers cannot damage metal. Their bills may be long and sharp, but they aren’t strong enough to penetrate metal. Their destruction with wood and bark, however, is another subject altogether!

Experts suggest that the pecking action is the one that causes the damage, and this is necessary to get to the food and nesting area. Yet, because the drumming effect is slightly different to that and simply performed for noise effect only, woodpeckers aren’t really looking to damage the metal they peck – simply cause a disturbance.

The problems experienced by people here is the annoyance rather than potential damage when it comes to woodpeckers and metal objects.

Fortunately, this noisy period doesn’t last for long, and once the mating season is over, it generally subsides.

Thus, many people merely resort to putting up with it for the short time frame it occurs. Some people, though, like to take a couple of measures to deter woodpeckers and their weakness for metal items!

Though there’s not much you can do to prevent woodpeckers pecking metal, there are a few methods you can try if you find a woodpecker’s constant drumming irritating!

Unfortunately, no matter how much effort you put into deterring woodpeckers from metal objects, they remain one of the most determined of birds.

So, you’ll often find most prevention methods start off well – but don’t last for long before these clever birds work it out and continue to drum and peck to their heart’s content!

But this period doesn’t last forever, and if you’re keen on keeping them coming back to your yard regularly, the woodpecker’s fondness for metal may just have to be one vice you allow them.