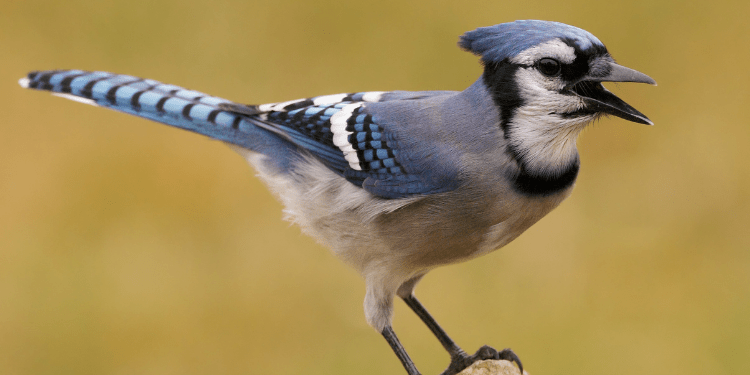 Did you know that blue jays are very vocal birds? You probably do if you have them visiting your garden. Blue jays actually have a wide vocal range and can even imitate other birds. So, what does a blue jay sound like?

According to author, Donald Kroodsma, blue jay calls can be categorized into five distinct groups. He explains this in his book titled “The Singing Life of Birds”.

Let’s investigate these in more detail.

These are loud, non-musical screeches and are meant to alert other blue jays that there are predators nearby such as hawks. These calls are also used by a blue jay to locate his mate.

When the jay’s mate hears the call, she’ll respond similarly so that the male bird can find her.

One example of these calls is the “squeaky gate call” that the blue jay makes while simultaneously bobbing his head up and down. It really does sound like someone opening an old iron gate that squeaks.

These are generally quiet calls or chirps between mated pairs. They are used when the birds are nest building or foraging for nesting materials.

Blue jays will also use these types of calls when they’re interacting with another mated pair. They can also be made between young birds and their mother. 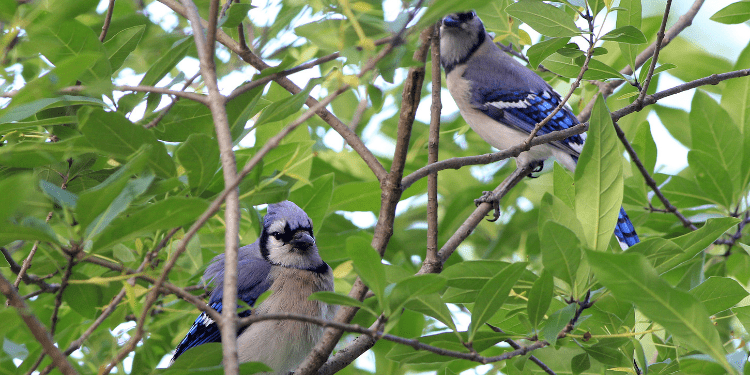 These calls are only made by female birds. They really do sound like a child’s rattle being shaken vigorously. The can be described as a series of clicks with one sharp click at the beginning and end of the call.

While the female bird makes this call, she also bobs up and down. These calls are made when another blue jay is intruding on the female’s territory.

5. Other Calls That Don’t Fit Into The 4 Groups Already Mentioned

Blue jays are actually considered songbirds, but they don’t have their own song. However, a common song-like call that blue jays make is called the “whisper song”. This is described as a soft, song-like conglomeration of chucks, clicks, whines, whirs, liquid notes and elements of other calls.

This song can last around two minutes or longer. It’s normally used during the bird’s breeding season.

You may also hear a blue jay hammer its beak loudly. This is a signal that there’s danger nearby or perhaps their nest has been disturbed by a predator and their chicks have been taken.

An interesting fact to note is that blue jays seem to be noisier in the fall. This is because they are quite secretive when they’re nesting during the spring and summer. During this time, they don’t want to alert predators to their nest or baby birds.

Conversely, during the fall, they’re more actively hunting for food and like to make a variety of calls, especially to chase away other birds from any backyard feeders.

Blue jays are great mimickers and will often imitate hawk calls, especially the red-shouldered hawk. It’s thought that they do this to alert other jays in the area that a hawk is nearby.

Hawks will steal blue jay eggs, so this is especially important when blue jays are nesting.

It’s also believed that the jay will imitate a hawk to make other birds species think that a hawk is nearby. This generally helps to scare other birds away from feeders and nesting sites.

Blue jays have also been known to imitate other bird calls such as the Merlin. They seem to do this to add to their already extensive repertoire.

Because of their excellent mimicking abilities, blue jays found in urban areas have been known to imitate the sound of a cat and even a cellphone ringtone. 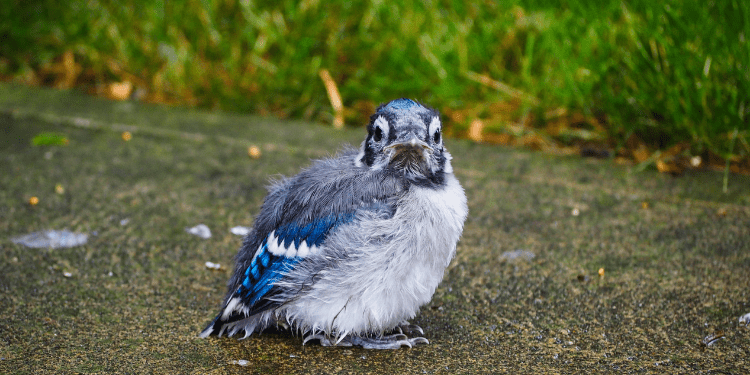 Fledglings usually achieve their entire vocalization repertoire within 6 months after hatching. Certain jeering calls that baby birds use to ask for food, disappear a few months after the birds reach their fledgling stage.

They return a few months later to be used in a different context. Researchers have discovered that birds who are raised in complete isolation, will not develop the “squeaky gate” call. However, birds that are raised and exposed to normal urban sounds will develop a repertoire that includes imitations of the sounds that they hear.

Blue Jays Are Constantly Adding To Their Repertoire

Throughout their lives, blue jays are able to learn new calls and modify their old ones.

Why do blue jays scream?

Blue jays scream like hawks to scare away other birds from feeders.

Yes, sometimes blue jays will sing at night much like other birds like the northern mockingbird and the northern cardinal.

Do blue jays chirp at deer?

A blue jay will use a number of vocal calls to alert you that there’s a deer nearby.

If you have blue jays visiting your yard, you’ll no doubt be aware of their extensive vocal repertoire. Some of their calls may even mimic other birds such as hawks. If in an urban environment, they can also imitate common sounds such as the ring of a cellphone or the mewing of a cat.

The most common calls made by blue jays can be categorized into five distinct groups. These include jeer calls, pump handle calls, intrapair contact calls, rattle calls and a fifth group of uncategorized calls.

Even blue jay fledglings have their own collection of calls when they’re hungry and demanding food. These calls will disappear from their repertoire and reappear a few months later to be used in a different context.

Have you heard many of the different calls made by blue jays that you can identify? Are there other calls that you’ve heard blue jays make that we haven’t mentioned? Please feel free to share your experiences with us in the comment below.