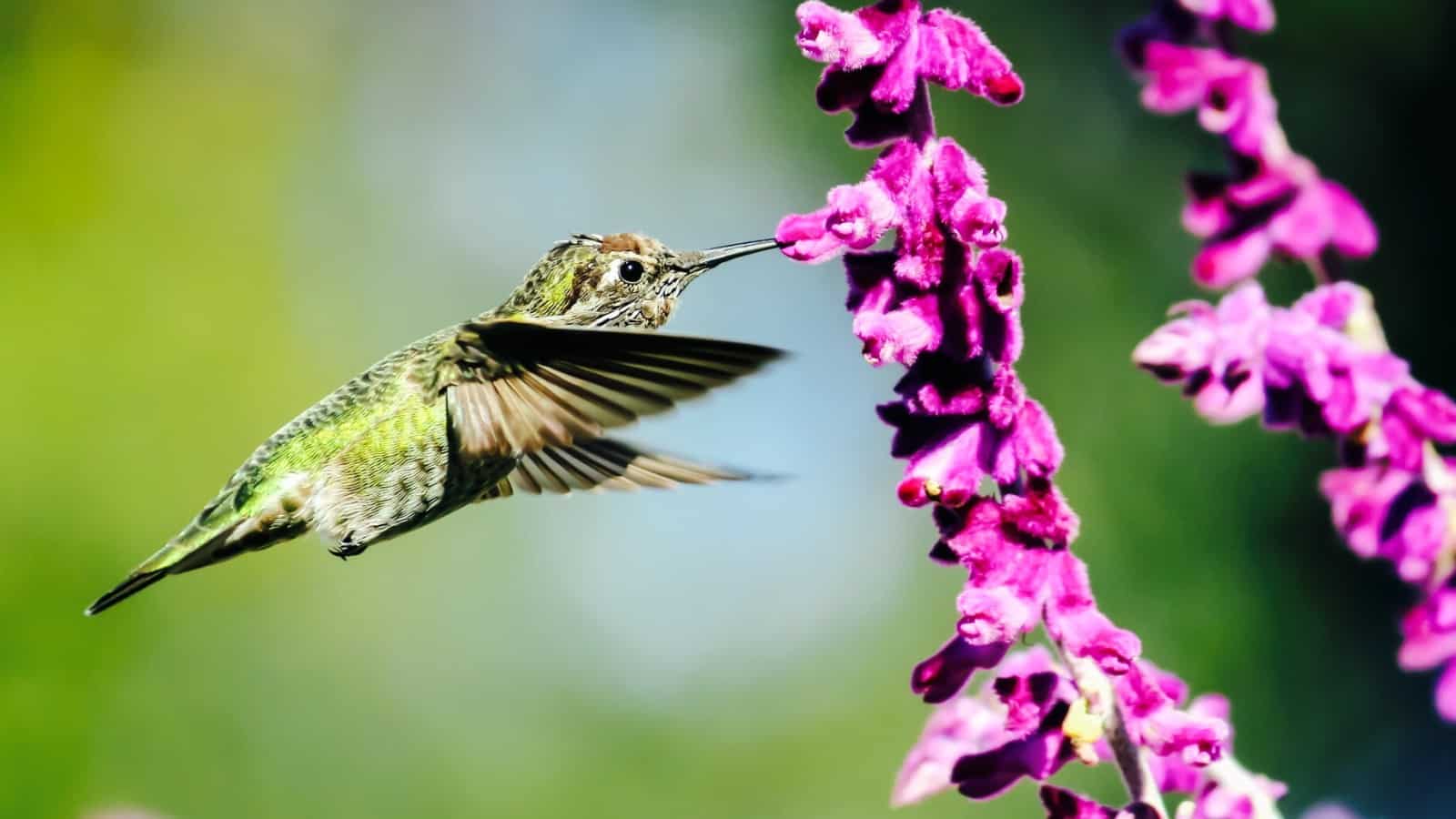 You can find hummingbird symbolism in cultures all over the world. Used as both a spiritual symbol and physical symbol, hummingbirds are associated with life, love, beauty, joy and freedom.

Each culture places their own special meaning on this little bird. Let us take you on a journey of hummingbird symbolism & meaning. After reading this guide you will have found an even deeper appreciation for this colorful swift creature.

As an indigenous species, hummingbirds have played a role in many legends and folklore of North and Central America. It is a particularly important bird for Native Americans.

Elsewhere in the world, you also find the hummingbird symbol but these associations are often more modern. This is likely because there are no hummingbirds found in the wild in Africa and Asia. Sunbirds, which also draws nectar from flowers, are a similar but different species found in this region.

There is still some discussion on the origin of hummingbirds. Some research shows that these birds actually have their origins in Europe which would explain their presence in historical European cultures.

Today, hummingbirds are one of the most recognized bird species. They are loved for their fast-moving wings, colors of joy and bright personality.

After reading this article, feel free to share with us what hummingbirds mean to you. We would love to hear your stories.

Native Americans have a strong connection to nature and this is reflected in the symbolic meanings of hummingbirds. The bird carries a different meaning for different tribes with messenger, luck, healing and energy as some of the common themes. Some also believe that the hummingbird grows out of a flower.

For many Native Americans of the northwest coast of North America the bird is a sign of good luck. You may find certain clans having hummingbird animal totem poles.

In a folklore, the hummingbird is what led the people out of the darkness and into the upperworld where there is sun and light and life.

In Navajo lore the same bird was sent out to explore but this time to seek what is beyond the blue sky. Despite the long distances he flew, there was nothing to be found.

The Cherokee believed that a medicine man once saved the life of an old woman by transforming himself into a hummingbird and retrieving the sought after tobacco plant.

The Hopi make a Kachina of the bird, a carving representing a spirit. They are of great significance, following the legend that hummingbirds were responsible for rain and making the land fertile again.

In many Caribbean countries it is believed that the spirits of loved ones live on in hummingbirds. It is therefore considered special when a hummingbird appears after the death of someone close to you.

The Taino are Native American people of the Caribbean islands and Florida. To them, this little bird represents both peace, rebirth and life. They draw inspiration from the way hummingbirds protect their territory which is why their warriors are called Hummingbird Warriors.

Trinidad & Tobago is known as ‘the land of hummingbirds’ and the birds are an important symbol on the nation’s coat of arms. Here they are also believed to hold the spirits of ancestors.

Although hummingbirds fly across many countries, Asia is one of the regions in the world where you won’t find this little creature in the wild. They are not an indigenous species but you can find the occasional hummingbird symbol in artwork.

In China, most birds are considered a symbol of good luck. They are seen as messengers of positive news which is why you might find their photo or a charm placed in specific rooms.

Recently, hummingbird fossils have been found in Europe, first in Germany and then also France and Poland. However, considering the distances they would have had to fly to reach the Americas there is still some debate if these are truly hummingbird ancestors.

Interestingly, some of the older European cultures do mention birds with similar characteristics. Some of their stories are also similar to the messages and symbolism held by Native Americans.

The Meaning of Hummingbirds in Ancient Civilizations

There are four ancient civilizations that a hummingbird symbol appears in; Mayans, Aztecs, Incas and Celts. Considering they are an American bird species, the latter is quite surprising. It just goes to show how long people have been fascinated by these birds.

In Aztec culture, there is a very close relationship between hummingbirds and Huitzilopochtli. Huitzilopochtli is the patron god of the former Aztec capital Tenochtitlan but he is also the God of War.

In some depictions, he is seen as simply wearing a hummingbird helmet while in others he is represented as an anthropomorphic being. Aztec talismans often have a hummingbird symbol or a symbol of Huitzilopochtli in them.

The beak carries even more specific symbolism. When worn as a talisman, it is said to provide the wearer with exceptional energy, skill and vigor. Hence the wearing of this article by warriors.

The Mayan origin tale of hummingbirds is a lovely one. The story goes that hummingbirds were created from all the leftover pieces for birds.

This is said to explain why they are so small and delicate. It is for this reason that they are able to enjoy the sweetness of nectar without affecting the flower itself. To compensate for their size, the gods gave them special wings that would allow them incredible feats in flight.

There is also a more central belief about hummingbirds in Mayan culture. It is said that the Sun God transformed into a hummingbird to be able to pursue the Moon Goddess.

By both transforming into hummingbirds they had the freedom to to marry. This love marriage is why the wings of hummingbirds shine bright in sunlight.

To the Incas, the hummingbird is a messenger bird. This is similar to how Native American tribes view the birds.

Like in many of the folklores from North America, the hummingbird relays messages between the gods and people. Their unique abilities in flight makes them the perfect creatures to travel between heaven and earth.

Celtics also held birds in high regard. They associate birds with wisdom and courage.

Also similar to Native American beliefs, birds were considered messengers that traveled between the heavens and the earth. Their presence were considered omens for things that might happen in the future. 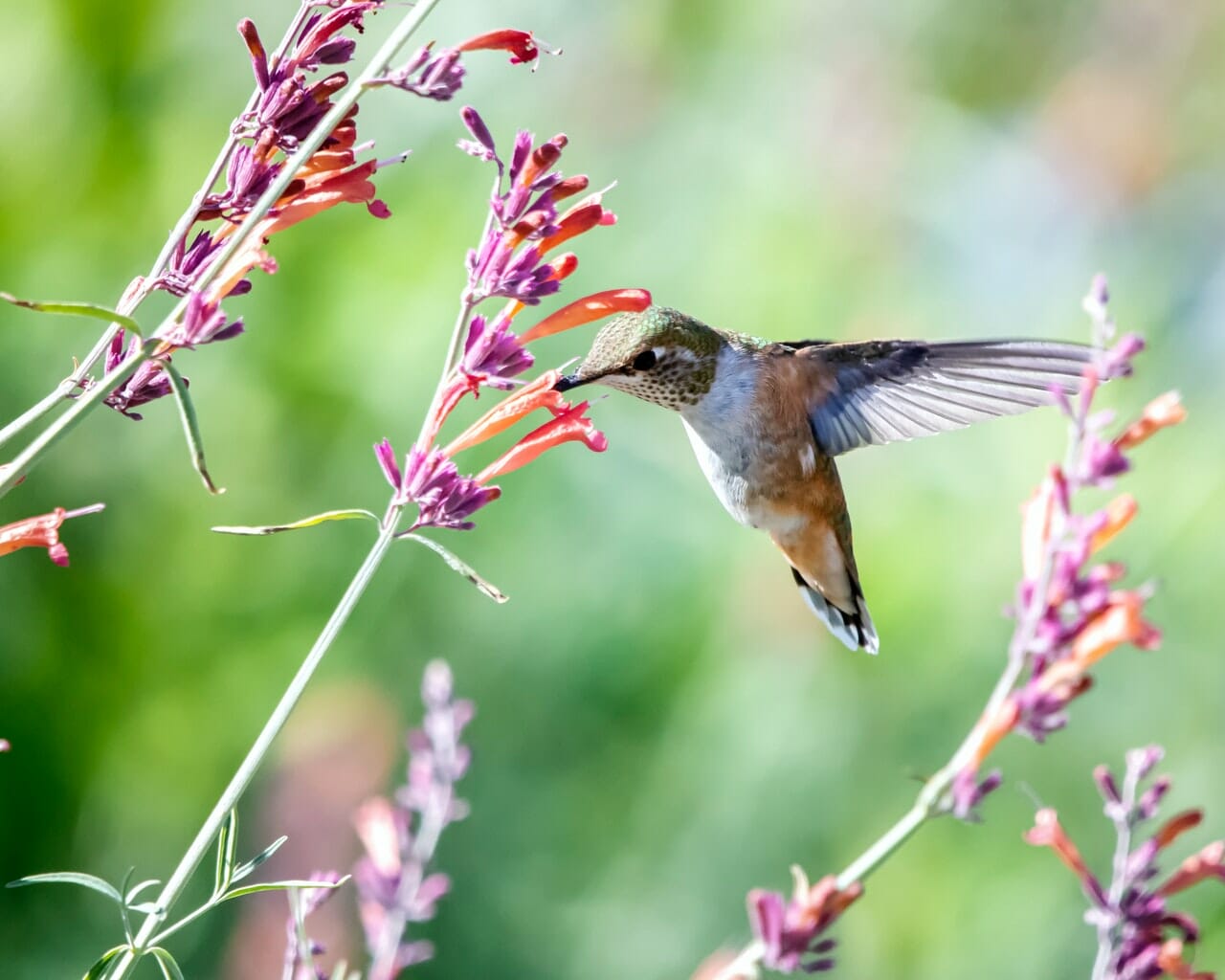 Drawing from ancient legends, folklore and cultures, hummingbirds are seen as an important spiritual symbol,, especially in Shamanism. Some believe to have a hummingbird power animal, spirit animal or totem.

Let’s explore the spirit a hummingbird encompasses in Shamanic beliefs.

Hummingbird as a Spirit Animal

This being acts as a spirit guide or messenger to the connected person. As a spirit animal, a hummingbird represents enjoyment and lightness.

If they appear to you, whether in your dreams or when you are awake, they are a reminder to imitate their energy. In other words, keep away from negativity by finding the joy and love in our lives.

Hummingbird as a Power Animal

A power animal is a spirit guide that you can call upon in moments of need. They can give you the energy, wisdom and abilities necessary to overcome negativity.

The ability in this case is being able to find your way in a steadfast manner with lightness in your path. This could be inspired by how hummingbirds stay in flight and how the pattern that their wings make symbolizes continuity.

Call upon this power animal when you feel like you have lost your way and need a new sense of excitement to keep going.

Hummingbird as a Totem

A totem is an object, being or symbol that encapsulates a person’s characteristics. A totem animal is often gifted at birth so that the baby carries them in their personality.

However, there are also less fortunate traits one must consider. Hummingbird flight takes up a lot of energy so those with this totem may need more time at home to recuperate and they might lose focus with ever-changing dreams.

There are many theories on the meaning of dreams, both scientific and spiritual. Not everyone gives the same meaning to a dream because of a difference in the perception of symbols.

It is possible to interpret a dream in more than one way. One option is to focus on the spirit of the dream, how it makes you feel in your heart. This is the more personalized approach.

Another approach is to assume symbols all carry the same meaning. There is less freedom in interpretation this way because things would have a set meaning instead of a personal one.

For this second way of analyzing your dreams, you can refer to the following hummingbird dream associations. The left column is what happens in the dream itself and the right column is a common interpretation. 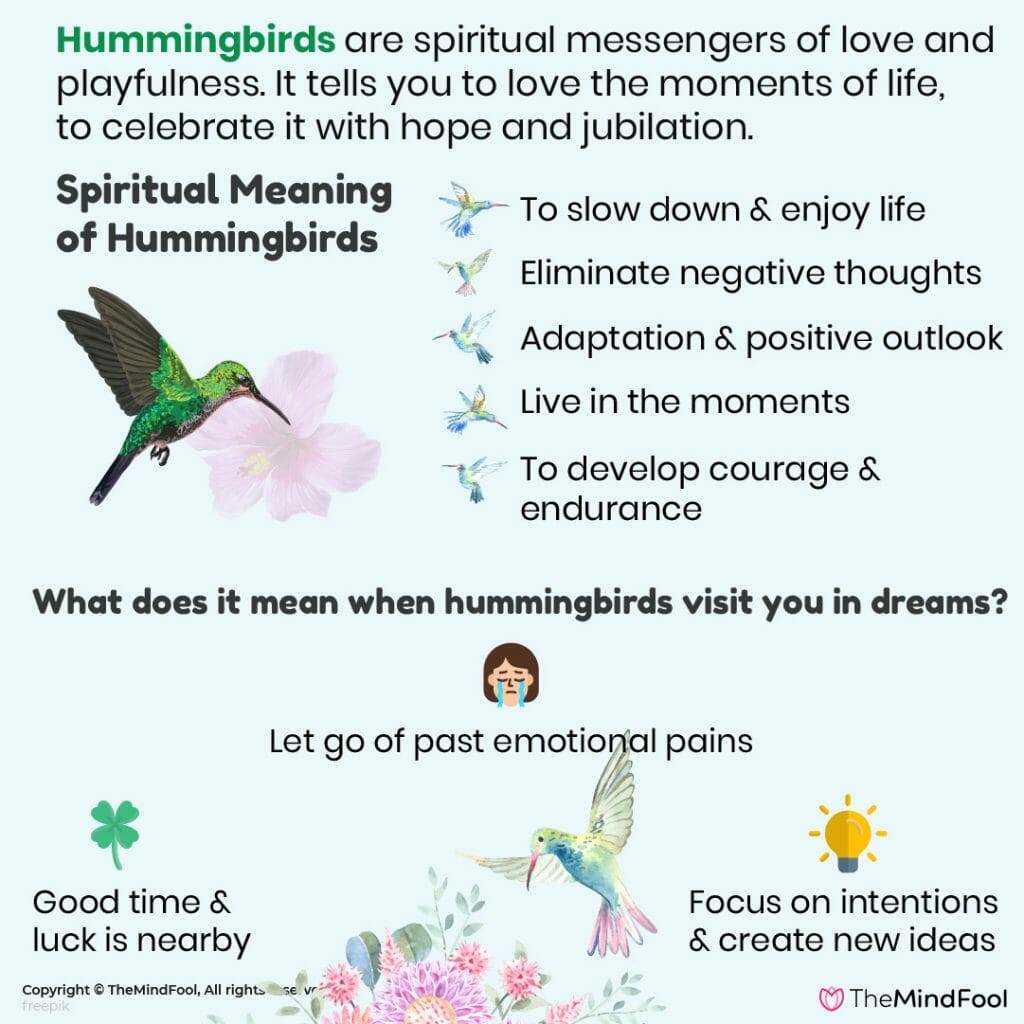 Many artists have felt inspired by the sweetness of hummingbirds and incorporated them in their artwork. What is interesting about art is that we often reflect on our life what the painting might mean as much as we try to discover the artist’s own message.

This tiny bird is a common feature in much of Martin Johnson Heade’s work. It is also the subject of many interpretations of Frida Kahlo’s self-portrait. Let’s take a closer look into the possible clues the hummingbird in these paintings might give us.

Martin Johnson Heade (1819-1904) was an American painter best known for his coastal landscapes. Later in life, with his travels through Brazil, he became infatuated with hummingbirds and tropical flowers.

His most famous piece is possibly Hummingbird and Passion Flowers (1875-1885). The tiny bird is also the star of Hummingbird and Apple Blossoms (1875) and Orchids and Spray Orchids with Hummingbird (1890) and Cattleya Orchid and Three Hummingbirds (1871).

Heade was known to have a strong interest in natural history. Like many people in his era, he was inspired by the works of Charles Darwin.

Frida Kahlo (1907-1954) was a Mexican artist best known for her self-portraits. One particular self-portrait titled Self-Portrait with Thorn Necklace and Hummingbird (1940) is full of symbolism.

In this oil on canvas painting she is wearing a necklace made out of thorns and a hummingbird necklace. The hummingbird is black and lifeless, a departure of the more common hummingbird spirit of joy and beauty.

Art historians and critics are still unsure of the true hummingbird meaning in this painting, as is the case for most great artworks. Some link it to Christian symbolism, possibly mirroring a crucifix, while others see it as a reflection of Kahlo’s life.

Kahlo suffered a terrible bus accident which left her bedridden for several years. Some relate the pain expressed in the painting as a reflection of that dark and painful time in her life. The hummingbird is sometimes also related to the Aztec God of War, perhaps symbolizing that Kahlo is a fighter, too.

The hummingbird is a small bird that holds strong symbolism for their home land in the Americas and beyond. It is a symbol of life, joy and freedom to many people.

A hummingbird has held significance in Native American cultures for ages and is represented in their folklore, art and totem. It is a revered bird, portrayed as a messenger in many traditional tales.

The interest in a hummingbird is easy to understand. From the physical ability to drink nectar from flowers to the hummingbird spirit that inspires joy in life. It is a special creature with special meaning.