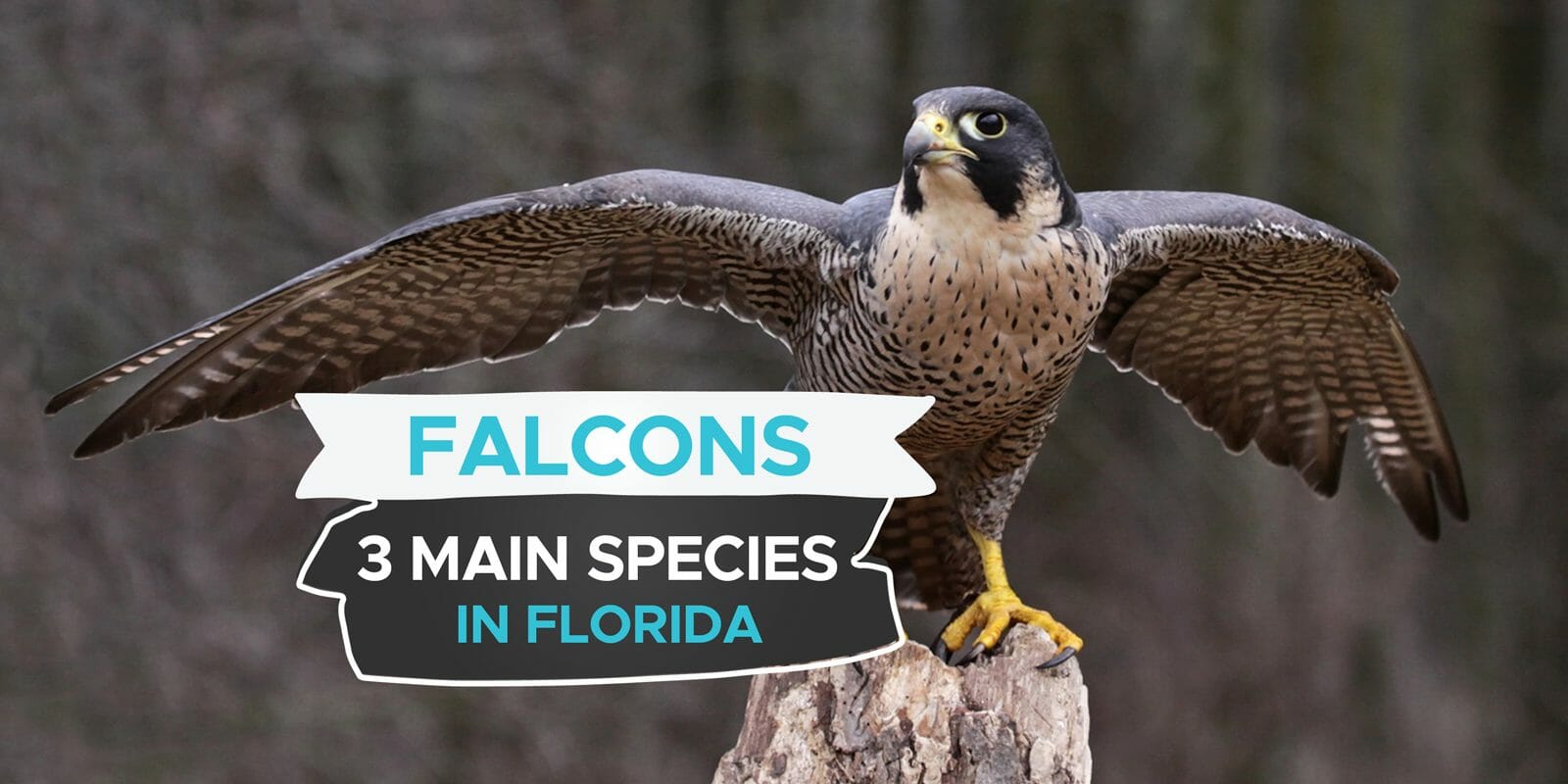 If you live in Florida, you’re likely to see 3 species of falcons that commonly reside in your state. These birds of prey are primarily revered for their exceptional hunting abilities and their speed.

Falcons are powerful birds and can be identified by their hooked beaks and pointed wings. They also have powerful chests and strong talons.

Let’s look at each species commonly found in Florida in more depth so you can identify them more easily when you’re out bird watching.

3 Species Of Falcons Found In Florida

The three most common species of falcon found in Florida include the Peregrine falcon, the Merlin and the American Kestrel. Here are some facts about each one:

As you can see, the Peregrine falcon is the largest of the three species and it’s also regarded as the fastest animal on earth with a diving speed of up to 200 miles per hour. 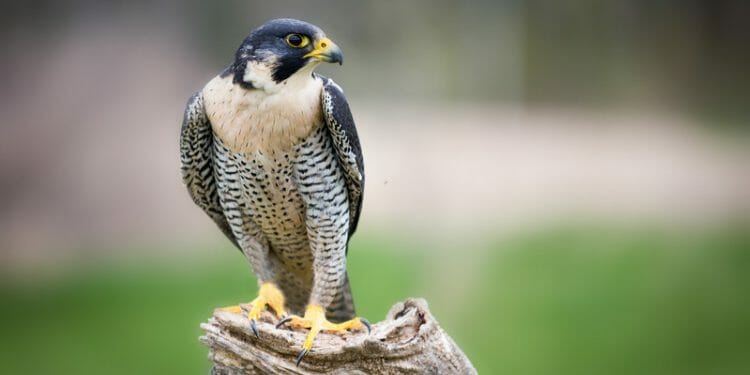 You can find Peregrine falcons all over Florida. In fact, Peregrines can be found on every continent except Antarctica. These birds of prey like to nest high up on tall buildings which is why they’re commonly spotted in cities.

Here are some distinguishing features:

The best time to see Peregrines in Florida is in the winter time. You should be able to spot them both along the coast and in the cities. In fact, sightings have been recorded in Florida Keys of up to 350 per day.

Their diet mainly consists of other birds but they have been known to eat fish and bats as well. Research has indicated that there are around 450 different species of birds that are on the Peregrine’s menu. These include gulls, ducks, songbirds and pigeons. 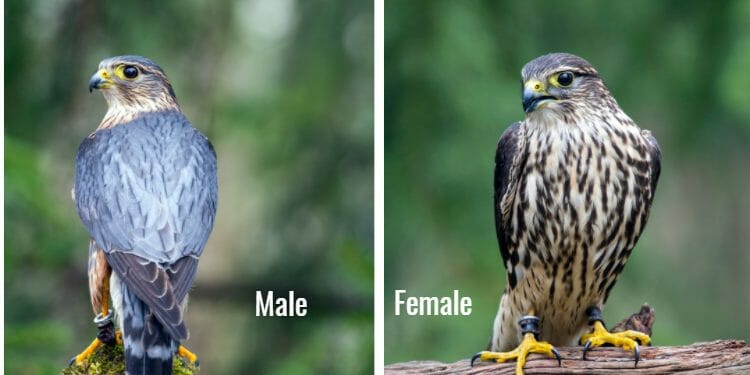 Merlins can also mainly be found in winter in Florida. They are far smaller than the Peregrine falcon but a little larger than the American Kestrel.

Their distinguishing features include:

Merlins can be found all over Florida in winter. They like to inhabit grasslands, coastal areas, open forests, parks, and areas around rivers. But, you have to have a keen eye to spot one of these birds of prey because they can be quite fast when in flight.

These birds have a very varied diet. This includes reptiles, bats, moths, voles and dragonflies. However, they also often feed on smaller birds such as larks, sparrows, pipits and sandpipers.

Interesting Fact
Merlins don’t build their own nests. Instead, they reuse nests that have been abandoned by other birds. They prefer nests abandoned by jays, magpies, crows and hawks.

Unlike the Peregrine falcon and the Merlin, the American Kestrel can be found in parts of Florida all year round. These birds are also regarded as the smallest of the Falcon species. Unlike other falcon species, the males and females of this species look entirely different.

Here are some distinguishing features of each:

These small birds of prey can be found in many different habitats including grasslands, parks and meadows. They’re quite comfortable around humans and will even nest in backyard nesting boxes.

Their diet mainly consists of reptiles, small mammals and insects. They like to perch on fence posts and telephone wires to keep on eye out for possible prey. They also have to be aware of predators such as larger birds of prey including owls, hawks and crows. 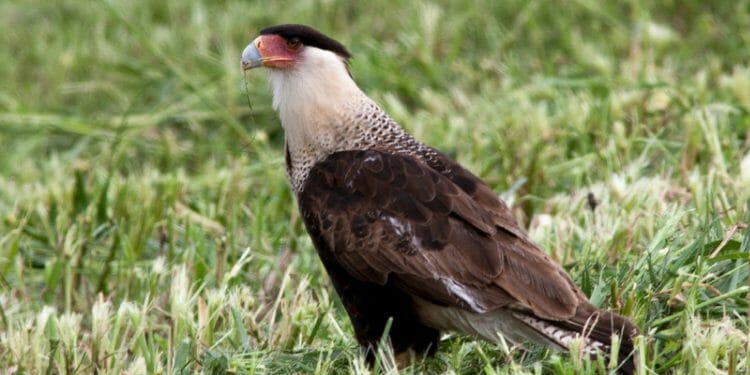 Another falcon that you might spot in Florida is the Crested Caracara, although this is not too common for this area. These unusual falcons have been spotted around Orlando by researchers.

Crested Caracaras are commonly referred to as the Mexican Eagle, however they actually belong to the falcon family. These birds of prey are around 22 inches tall, weigh around 45 ounces and have a wingspan of up to 49 inches.

These birds are quite distinctive in appearance so you can easily identify them with the following features:

These falcons are more like vultures because they feed mainly on carrion. They can be spotted feeding on roadkill or other dead animals in open grasslands. However, these birds will also capture their own prey including rabbits, smaller birds, snakes, skunks, fish and even baby bird eggs.

Although you’re likely to see falcons mainly during the winter in Florida especially along the coast and around open forests and grasslands, there are some excellent bird watching areas that you might like to visit to see these birds of prey.

Bald Point State Park is situated on the eastern tip of Franklin County. If you visit in the morning or late afternoon, you might get to see some Peregrine falcons here. This is also a great spot to see other migratory birds and even butterflies.

St. Vincent Island is on the westernmost end of Franklin County. The island is actually situated nine miles east of Apalachicola and is only accessible by boat. There’s a wildlife refuge office and visitor center right in Apalachicola.

If you visit in fall or winter, you’re like to spot Peregrine falcons as well as hawks and Bald Eagles.

The Guana River State Park is located at Ponte Vedra Beach on Guana River Road. Here you should be able to spot Peregrine falcons as well as a variety of shorebirds and songbirds.

Boot Key Island is a privately-owned island in the middle of Florida Keys within the city limits of Marathon. Although you can’t visit the island itself, you can pull over on the side of the road after passing through Marathon. Here you should be able to spot both American Kestrels and Peregrine falcons.

Pigeon Key is another island in Florida Keys. This island is accessible either by walking or taking a tram ride across the 2.2 mile Old Seven Mile Bridge. If you decide to walk across the bridge, you should be able to spoy both Peregrine falcons and American Kestrels as well as many other birds of prey such as hawks, vultures and bald eagles.

There are 3 species of falcons commonly found in Florida mostly during the wintertime. If you’re out bird watching you should be able to spot American Kestrels, Peregrine falcons and Merlins.

Both Peregrine falcons and Merlins migrate to Florida during the winter while American Kestrels can be found mostly all over Florida all year round.