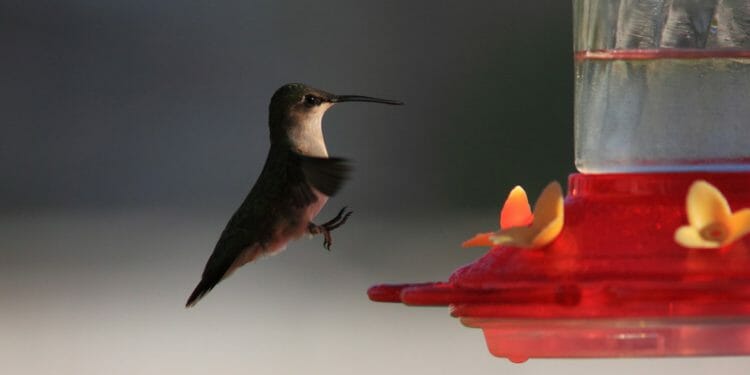 There’s a lot to learn about the quirky behaviors of hummingbirds. They are quite different to other bird species and generally exhibit different characteristic traits. Because they’re such busy little birds, constantly darting around and hovering, you might be wondering if hummingbirds land.

Hummingbirds do land but generally not in the way that other birds do. You see, hummingbirds have very short legs and small feet. This means that they can’t walk around on the ground like other birds. When they do land, they’ll most likely perch on a branch or the edge of a birdbath. On rare occasions, hummingbirds do hop but they do this sideways and use their wings to help them along.

However, their feet are designed in such a way that they can grip onto a branch quite securely. Once they perch, their tiny feet will latch on so that they don’t fall off. This is why hummingbirds will often hang upside down from a branch while they’re sleeping.

Hummingbirds Most Often Rest At Night

Hummingbirds are very busy during the day and spend most of their time darting from flower to flower or around your feeders. This is because they need to consume an enormous amount of nectar to keep their metabolism going.

And, they spend a lot of this time hovering. Whether it’s around your feeders or near your flower garden. It’s rare for them to rest at all during the day.

But at night, they do go to sleep, usually on the branch of a tree that is deep inside the foliage. They like to keep well hidden from predators and protected from the cold. When they sleep, hummingbirds initiate a state of torpor which is similar to the hibernation of bears and other animals.

This allows them to slow down their heart rate, their breathing and their metabolism. It means that they won’t starve while they’re sleeping and conserving their energy.

Female Hummingbirds Do Sit On The Nest During Incubation

One of the only times that you’ll see a female hummingbird sitting still is when she’s incubating her eggs. The eggs are very tiny, about the size of a pea, and they need to be kept warm. 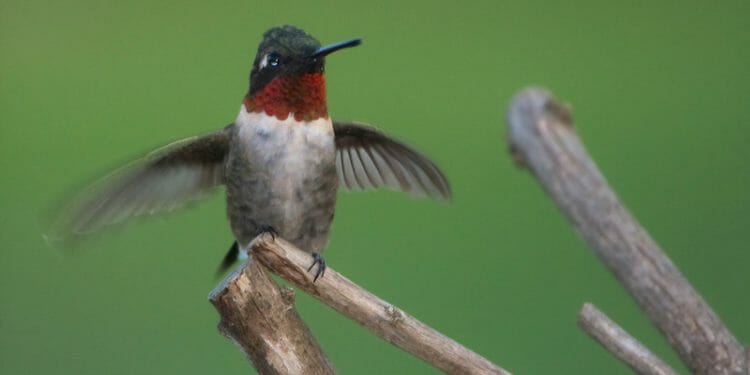 Hummingbirds Will Perch On A Branch To Mate

Contrary to popular belief, hummingbirds do not mate in mid-air. They may do all their courting while darting around and doing amazing aerial acrobatics but when it comes to the actual act of mating, they will do so while perched on a branch.

When the female bird has selected a male who she wants to mate with, she’ll generally point her beak at him. Then, she’ll perch on a branch usually close to where she’s building her nest.

Where Do Hummingbirds Rest At Night

You now know that hummingbirds do actually sleep throughout the night, but where do they go? Most hummingbirds will find a nice dense tree that is close to where their main food source is.

On rare occasions, you might see a hummingbird hanging upside down from your feeder. This usually happens if your feeder is in a sheltered position. Don’t be alarmed though. The hummingbird has just gone to sleep and will usually wake up again when its ready.

It’s also interesting to note that hummingbirds don’t huddle together to sleep. You see, they are solitary birds and are not very sociable at all. You might see more than one hummingbird on the same branch if you look carefully but they’ll be well spaced out. It just means that it’s a well protected branch that is attractive to the hummers. 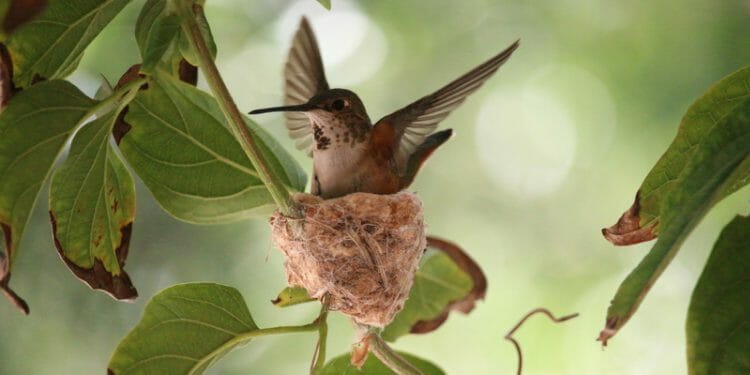 Do Hummingbirds Nap During The Day?

As you are probably aware, hummingbirds have to spend most of their day feeding on nectar and tiny insects to keep up the energy that their super high metabolism needs. Generally, it’s very rare for a hummingbird to stop moving during the day.

They’ll flit from flower to flower to gather the nectar that sustains them throughout the day. Having such a high metabolism means that hummingbirds process their food incredibly quickly.

Due to this need for constant energy replenishment, hummingbirds do not nap during the day. Even a short nap would deplete their bodies of all the energy and they would starve. Therefore, for hummingbirds, napping is out of the question.

Do hummingbirds ever stop flying?

It’s rare for hummingbirds to ever stop flying except at night when they sleep.

Yes, hummingbirds sleep almost every night. This allows them to preserve their energy for the hectic activities of the day.

Can hummingbirds see in the dark?

Hummingbirds have very poor night vision, so they’re unable to see very well in the dark.

Hopefully, you now understand that hummingbirds do not land like other birds do. And, especially not on the ground. You see, their legs and feet are very tiny and are not designed for walking or hopping.

In saying that, a hummingbird can hop but it does so sideways with the aid of its wings. However, hummingbirds are great at perching and will do this every night when they’re ready to go to sleep. Their tiny feet can latch onto a branch tightly so that they don’t fall off while they’re in their state of torpor. This means that they can often be seen hanging upside down while they’re asleep.