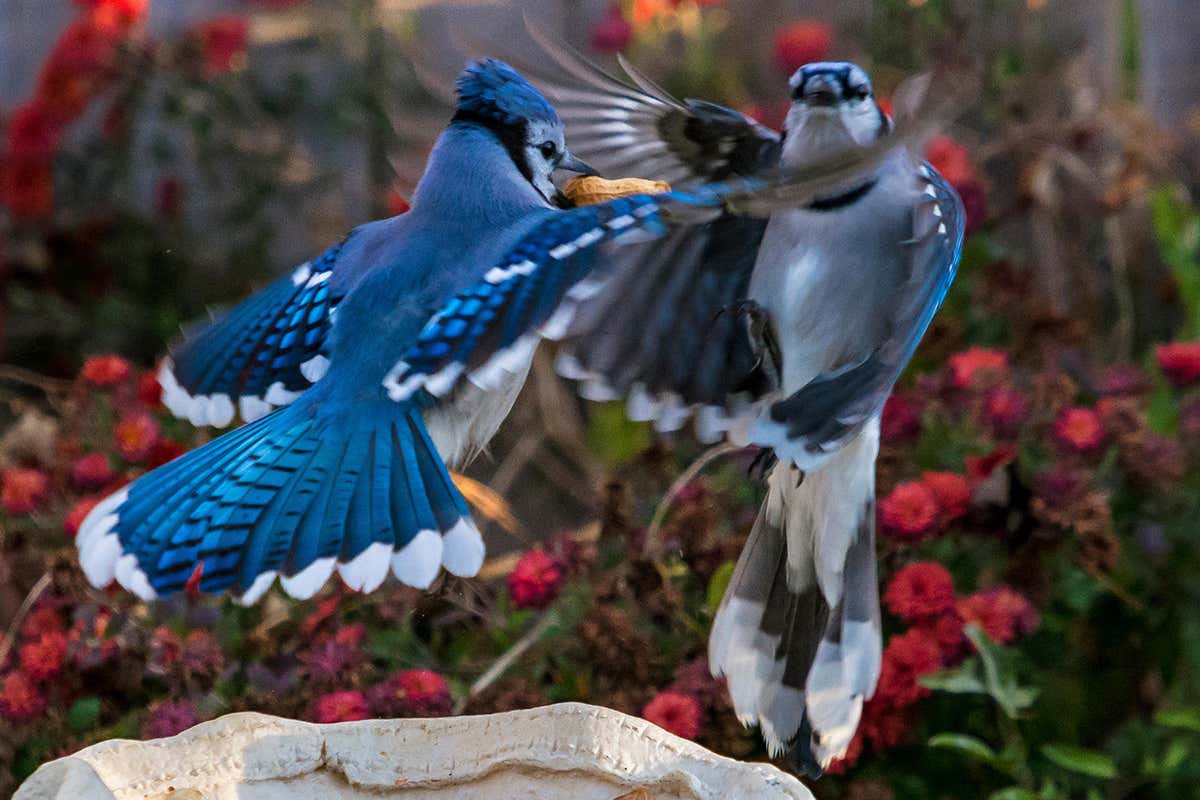 Blue Jays have a bad reputation for being aggressive birds but they do not normally eat other birds. A study of their feeding habits found that only 1% of the studied birds had traces of eggs in their stomach.

So, where does this false perception come from? Blue Jays are loud and territorial but they deserve more admiration.

Do Blue Jays Kill Other Birds?

Blue Jays are very social birds but only with their own species. Towards other birds, and sometimes even humans, they are very territorial.

Given their large size, Blue Jays can easily bully other birds and they don’t hesitate to do so. If you have a feeder in the backyard that attracts Blue Jays, you may have seen them force away smaller visitors.

This aggressive behavior may be why people think that Blue Jays eat other birds. There are also anecdotal stories of Blue Jays killing baby hummingbirds and baby robins. Although it is possible, it is also extremely rare.

About a century ago, scientists checked the stomach contents of Blue Jays for traces of other birds and bird eggs. They only found these traces in 1% of the birds.

So, even though you may have heard stories about Blue Jays eating baby birds or raiding eggs from other nests, this is not common behavior. They do not deserve to be made out as evil killer birds.

When Do Blue Jays Attack or Eat Other Birds?

Blue Jays are most likely to attack other birds around a food source. This can be around bird feeders but they may also defend bird baths or their nest.

Interesting Fact
As opportunistic omnivores, Blue Jays may eat other birds eggs or fledglings but this is not common behavior. They prefer seeds, nuts and insects.

Also, when a Blue Jay does feed on a bird, it is more likely to have already been dead or dying when they got to it. They do not have the hunting instinct that raptors do. 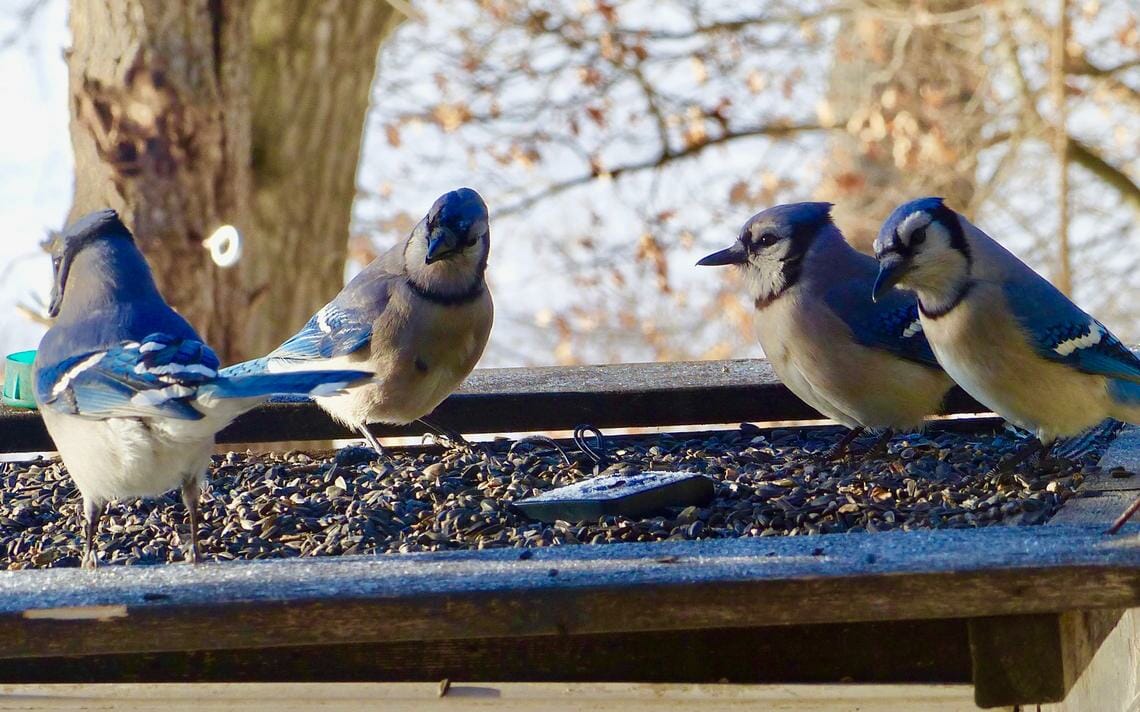 Blue Jays have a strong family bond and often band together to protect their territory. They chase away other birds and animals by attacking as a mob.

These blue-crested birds are known to attack owls and even raptors as a group. They do so to protect each other from their prey but also to protect their food, nesting materials and fledglings.

At bird feeders, they are known to be true bullies. Smaller birds rarely have a chance when Blue Jays are around.

Are Blue Jays Aggressive Towards Humans?

Sometimes, humans get mobbed by Blue Jays. Again, this is quite rare and when it does happen, there is a reason for it.

Animals don’t attack humans for no reason. If Blue Jays start chasing or attacking you, it is probably because you are too close to their nest.

It is less likely that they attack humans for being close to a food source or their nesting materials. Their most fierce aggression comes out when the female is nesting or when they have fledglings.

As a bird lover, it is best to recognize their mood and you can do so by reading their crest.

When they feel 100% safe, Blue Jays lower their crest, most common when feeding in a group. When vocalizing, their crest is raised.

The higher the crest is raised, the more aggressive the Blue Jay is likely to be. This is a sign that you are treading too close to dangerous territory and should probably admire them from a safer distance.

What Birds Are Blue Jays Afraid Of?

Although Blue Jays are seen as the playground bully, they also get bullied themselves. Even as a blue-crested mob, they cannot compete with certain birds.

Are Blue Jays Good to Have Around? 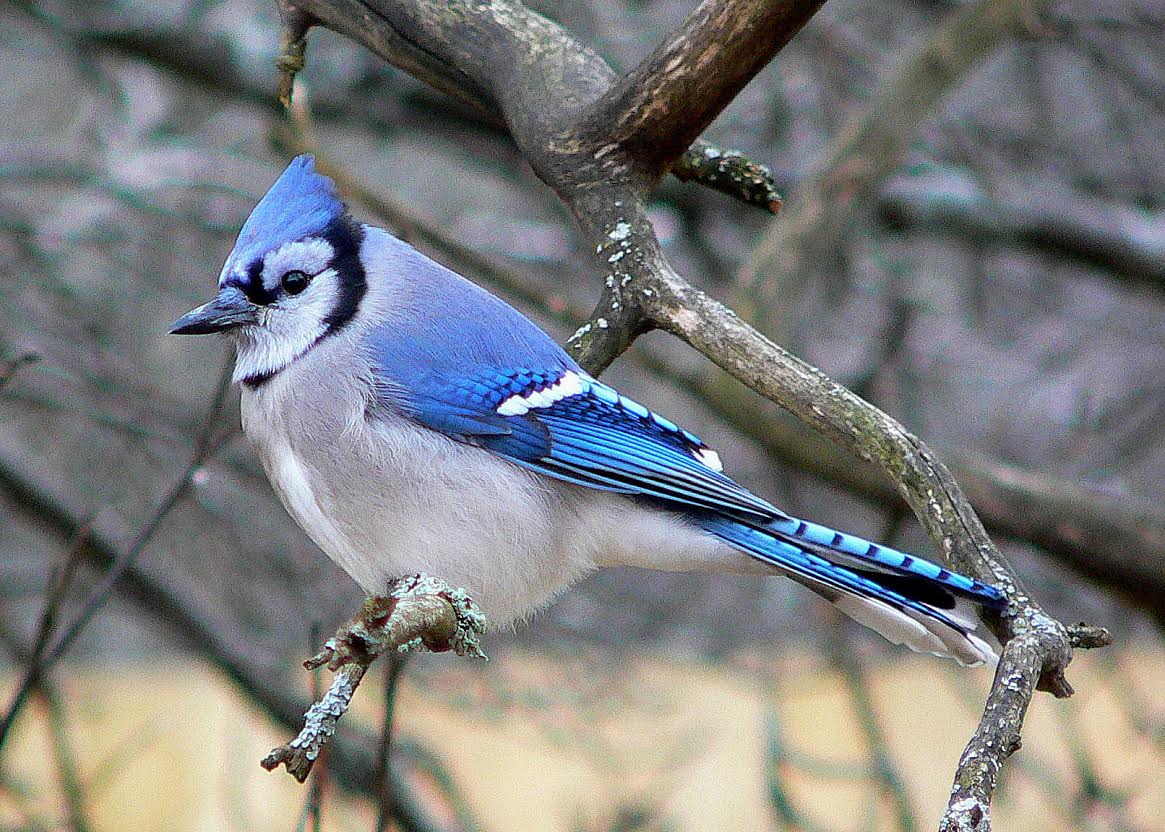 There is no reason to chase Blue Jays away from your backyard. In fact, they serve an important role in ecosystems.

They are known to store their food which is how they support the spreading of certain types of trees. They seem particularly fond of acorns.

Even though they have a reputation for attacking other birds, their presence may also be beneficial to other birds. Since they are not afraid of attacking larger birds as a mob, some of the smaller birds surrounding them stay safe, too.

Blue Jays are omnivores and in very rare cases are known to eat the nestlings or fledglings of smaller birds such as robins and hummingbirds. However, most of their diet consists of insects, seeds and nuts.

Do Blue Jays Attack Other Birds?

Blue Jays are known to be very territorial and may attack other birds to protect feeders or their nests. They may attack smaller birds on their own but chase away bigger competition by forming an aggressive mob.

Why Are Blue Jays So Mean?

Blue Jays are not inherently mean. Like most birds and animals, their aggression has to do with protecting their territory and their young. The mean streak associated with them may be due to their preferred defense mechanism; forming a mob.

Blue Jays are not the carnivorous bird killers that they are made out to be. Bird’s eggs and baby birds are far from their favorite meal.

However, they are omnivores and will do so if necessary, even eating smaller adult birds. Even then, it is most likely to be a bird that is already dying or recently deceased.

Their bad rep may stem from their territorial behavior. Blue Jays are fierce birds that will protect their food sources and nests as a loud and aggressive group.

When banding together, these blue and crested birds are able to chase away much bigger birds. Funnily enough, this is also how they inadvertently protect other birds from their prey. Can we please talk more about how great Blue Jays are for ecosystems, instead?